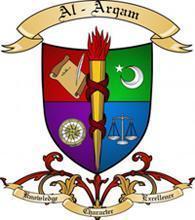 The House System was established by Al-Arqam's Class of 2010 to encourage friendly competition and activity among Al-Arqam students. Students in grades sixth-twelfth are appointed to Houses based on their characteristics. The four houses were are based on major cities or empires in Islam: Andalusia, Medina, Samarkand, and Jerusalem.

Andalusia, Spain: Andalusia was the greatest and most vibrant Muslim stronghold in all of Europe in the Middle Ages (711-1492 AD). It was characterized by rich, cultural, and artistic expression and intellectual discourse. It spread from the Iberian Peninsula in Spain to the egdes of the Pyranees mountains in modern-day France. Many of the most famous Muslim contributions to the world, in the fields of literature, poetry, art, architecture, philosophy, and medicine, grew out of this region. It is also known for its significant Muslim built structures, which changed the faces of architecture. Students of this house are: artistic, creative, scholarly, uplifting, witty, intuitive, resourceful, and visionary.

Medina, Saudi Arabia: Islam flourished in Medina, located in western Saudi Arabia, after the Prophet (PBUH) migrated to the city from Mecca and continued to do so afterwards; it's still the most well-known and visited Muslim cities. It was ruled by the four khulafaah, under which the standard version of Qur'an was established, hadiths were collected, and many other Islamic endeavors were succesfully completed. It has always been a leading center of significant Islamic achievements and political power in the Islamic world.

Samarkand, Persia: Samarkand is the second largest city of Uzbekistan and the capital of ancient Persia, and is more than 25 centuries old. Ancient Muslim manuscripts referred to it as the "Gem of the East." Europeans called it the "Land of the Scientists." When Alexander the Great first saw Samarkand, he exclaimed, "I heard that the city was beautiful, but never thought it could be so beautiful and majestic." It was an important trade center between the regions of China and the Mediterranean, along the silk road. In the early 8th century AD, it came under Muslim rule and was a significant center of Islamic culture. It is the home to lavish mosques dating from the 14th and 15th centuries.

Jerusalem, Palestine: Jerusalem has always been a place of religious significance, being the third holiest city in Islam. Many prophets spread the word of Allah there, and it's also where the Dome of the Rock and Masjid al-Aqsa are located. During the Ottoman rule, dating back to 1517, it prospered and brought about many innovations such as efficient postal systems and modes of transportation, and scientific advancements. It was also prosperous due to the tolerant nature of the Muslim rule at the time. Jews, Christians, and Muslims lived amongst each other in peace and harmony.